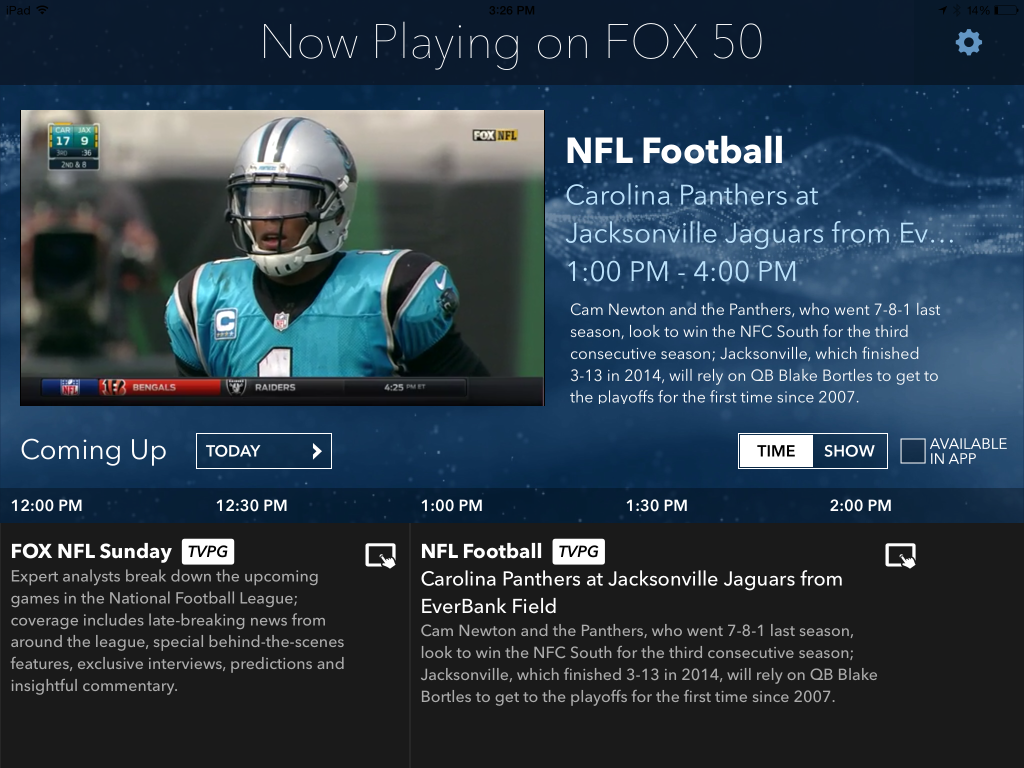 Among the many experiments underway at Capitol Broadcasting Co. over the past decade has been a technology that allows live video streaming over mobile devices for audiences within certain boundaries.

That might not sound too complex considering the many live watch apps on mobile devices today. But for a local television station affiliated with a major network, live streaming content that typically appears on TV hasn’t been possible or allowed.

Today, Capitol Broadcasting or CBC (ExitEvent’s parent company) announces a groundbreaking partnership between its FOX 50 station and a startup within its New Media Group called TotalCast.

Thanks to technology created by TotalCast and secured by a CBC patent earned nearly a decade ago, FOX 50 becomes the first independently owned TV station to launch its own app for streaming local news, sports games or shows.

For now, it’s only available to AT&T U-verse customers, but the hope is that other cable providers sign on in the Triangle. And the bigger vision is that FOX affiliates in the 210 television markets around the U.S. take notice, and eventually NBC, ABC and CBS loosen their restrictions, opening TotalCast’s technology to a huge market and allowing any person in any city to watch a local television station live from their phones.

The big picture for local broadcasters is the ability to better target its customers with advertising on their mobile devices, adding profits to their businesses.

“The promise is that you get higher CPM (impressions) for ads because you’re serving that ad with some knowledge about who is watching it,” says Kirk Owen, TotalCast’s general manager.

Media, gaming executive at the helm

Owen (pictured far left above) started working with TotalCast more than a year ago. A serial entrepreneur with experiences in gaming and media, he’s known locally for raising venture capital and then selling his Chapel Hill gaming company Merscom to Playdom, which was then sold to The Disney Company, where Owen led a gaming studio for nearly a year before moving on in 2011.

He most recently led a venture-backed startup called Zenph Sound Innovations, which pivoted in 2012 to provide live online music lessons on a site called The Zoen. Prior to that, it had a technology that digitally decomposed music to help musicians recreate iconic performances throughout history.

After struggling to raise money and earn adoption, Zenph sold its original technology to Steinway & Sons earlier this year. Steinway is now incorporating it in a new line of high-end player pianos.

Several buyers are in play for The Zoen, which Owen admits was too early when it launched three years ago. He’s in the process of transitioning out of the business.

That’s mostly because he’s become so excited about the opportunity at TotalCast. A year ago, Owen feared TotalCast was too far ahead of the market (like The Zoen). But the quick rise of Netflix, Hulu, HBO GO and others has moved revenue projections for Internet delivery of TV to $25 billion this year and $50 billion by 2020.

Separately, the television business in the U.S. is about $160 billion, and half of that is advertising.

“There are not many industries over $100 billion a year and this is one them,” Owen says. “We feel like we’re in the right place, right time. The Goodmons had the vision nine years ago that this was going to happen and have positioned the company to be in the good place we are in right now.”

Fox is the first of the major networks to allow its affiliates to create their own live streaming apps. It provided a set of requirements, security and authentication standards that TotalCast had to meet. Next, TotalCast had to get the cable networks on board.

The content has to be properly geo-fenced so it only shows up for subscribers, and it must have particular resolution, adjustable bit rates, file sizes and other technical aspects to get the cable company’s blessing.

An added level of complexity is around the rights that local affiliates have to certain content. FOX 50 sometimes has rights only to “over the air” versus “over the Internet”. That means TotalCast’s software had to make it easy for affiliates to set up their stream based on the content they’re allowed to broadcast.

It doesn’t make sense for individual companies to build this technology, Owen says. It’s too complex and expensive. TotalCast spent more than a year building the platform and more patent work is underway.

“We do geolocation, which is patented, geofencing, stream management, authentication and analytics in the background, and present data in a way that shows insights,” he says. And in a software-as-a-service model that is affordable for any size company.

The bigger picture for local television affiliates is around mobile advertising. FOX 50 gets to collect all of the data about the people using the app. Eventually, there will be ability for “dynamic ad insertion” which means FOX can serve a specific ad with some knowledge about the person watching it. It’s hard to collect that kind of individualized data from a television watcher.

“We help maintain brand loyalty and identity with people who want to watch television over the Internet versus going into the generic FOX app,” Owen says.

Planning a future for TotalCast

The hope is that the other major networks will establish rules for affiliates to build their own streaming apps, and that more providers like AT&T will offer the apps to their subscribers. Because TotalCast is the first in the market, it can take advantage of those industry moves.

TotalCast plans to target both mom-and-pop companies and big affiliate groups like Sinclair Broadcast Group, Tribune Broadcasting and Media General. It also put in a bid to develop a live streaming app for the 2016 Olympics, recognizing the opportunity around live sports events.

Finally, a TotalCast software development kit could allow broadcasters to include live streaming in their existing apps. For example, the WRAL News App could eventually have a live component. It makes more sense to build into the existing app with tens of thousands of downloads verses create a new one for live streaming.

TotalCast could also eventually spin out of Capitol Broadcasting. That’s what happened with Stepleader Digital, now called Reveal Mobile. Stepleader raised $4.4 million from outside investors in 2012, and has since closed a new round since pivoting to the mobile advertising space.

“We have a real product and customers but we have to get a certain level of traction before we spin it out,” Owen says.

Users like you and me may be the ones to help that happen. If U-verse customers in the Triangle can watch NFL on FOX, local news as well as shows like Gotham and Empire from their tablet devices wherever they are, TotalCast presumes that Time Warner, Dish Network and other cable subscribers will expect the same.
← TotalCast and FOX 50 Case Study
→ How Geofencing Helps Stream Local Channels