This article originally appeared on capitolbroadcasting.com.

Capitol Broadcasting is now the holder of two patents. Five years in the making, the patents are the first ever issued to CBC. 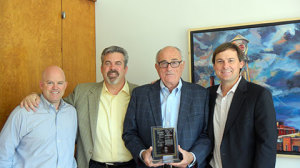 The patents are for, “A system and method for delivering geographically restricted content, including but not limited to over-air broadcast programming to a recipient over a computer network, namely the Internet. The content is only delivered over the computer network if the recipient’s computer or network device requesting the content over the network is verified to be located in the geographically restricted area.”

Patent 8,423,004 was issued to CBC earlier this year. Issued in April, patent 8,423,004 extends the concept of the original patent to all terrestrial transmissions, which includes WiFi SSIDs and cell tower IDs.

CBC originally filed for the patents in 2007. When Sam Matheny, a long-term CBC employee, became the VP of Policy of Innovation, a new CBC position, last year, he immediately set to work on getting the patents issued. Matheny worked with CBC’s patent attorneys on the approvals. The task required numerous filings and even an in-person visit with two patent examiners at the USPTO in Washington, DC.

“Our goal is to use these patents as part of an evolving media landscape where more and more content is moving to the internet,” said Matheny. “Jim has long believed that we should be able to deliver our content over the internet as long as we keep it in our market.”

The two patents are part of what CBC hopes will continue a long line of forward-thinking and inventions to better serve our viewers. We already have other patents pending.

A History of Firsts
On May 9, 1996, WRAL-TV filed the first application in the nation for a license to operate a high-definition television station. On June 19, the Federal Communications Commission (FCC) granted WRAL-TV the first experimental HDTV license in the country. WRAL-TV went on to transmit the first digital signal, culminating 20 years of dreaming and planning by broadcasters around the world.

WRAL set another milestone on Oct. 13, 2000, becoming the first TV station in the world to produce and air an all-HD newscast, including graphics, live shots, and news stories.

CBC also developed the nation’s first television mobile application in 2004, mobile video channel in 2006, and iPhone application in 2008. We provided video offerings with the nation’s three largest carriers: AT&T, Verizon & Sprint.
TotalCast was the first solution to offer Internet delivery of video streams to geographically restricted areas. When fully deployed it will enable media companies to offer a 24×7 simulcast of their channels while respecting and building on the existing industry business structures.